1. About Equipment and Pets

In StoneAeon, characters will never disappear once they have been created. They will bear witness to the growth of StoneAeon and the evolution of civilizations. Each wallet address can own multiple characters in the StoneAeon world. These character NFTs can be transferred and traded between different users.

To earn greater achievements and higher returns in StoneAeon, users must keep improving their characters’ computing power, which is determined by the combined computing power of the equipment and pets worn by the character:

In Stone Aeon, equipment refers to clothing, weapons, and pets that can be worn and used by a character.
Wearing equipment is the primary means through which users improve a character’s computing power in StoneAeon. Different equipment comes with different attributes, as well as a varying range of computing power. Equipment attributes mainly include Name, Wearing Position, Level, Rarity, Computing Power, Suit, etc.

In StoneAeon, pets, like equipment, can also be worn by characters and are also a primary way for improving a character’s computing power. Different pets come with varying attributes, which mainly include: Name, Wearing Position, Level, Rarity, Computing Power, etc.

Pets are an independent development system in the StoneAeon world. Users can gain a certain sense of achievement and attribute enhancement by capturing and upgrading pets in the game world.

Pets are also presented in the form of NFTs in the StoneAeon world, and users can complete the transaction and transfer of pets through the in-game trading system.

Equipment (replaced or worn) comes from the following channels:

When characters are being created, StoneAeon will randomly select and present two equipment NFTs (e.g. clothing & weapons) and one pet NFT for each character from the 75 types of genesis equipment and install them in three parts of the character.

Upgrading equipment refers to synthesizing two equipment NFTs or pet NFTs of the same category and same level into one equipment NFT or pet NFT that is one level higher.

In addition, if a user owns multiple low-level equipment or pets in BOX, he can sell them via MARKET or burn them via RECYCLE for a certain amount of SAET.

At the same time, the synthesis upgrade of equipment and pets in the StoneAeon world consumes a certain amount of SAET, which is calculated as follows:

In particular, 2,000 is the starting SAET consumption for the default level (1) upgrade, and level refers the current level.

In particular, 3,000 is the starting SAET consumption for the default level (1) upgrade, and level refers the current level. 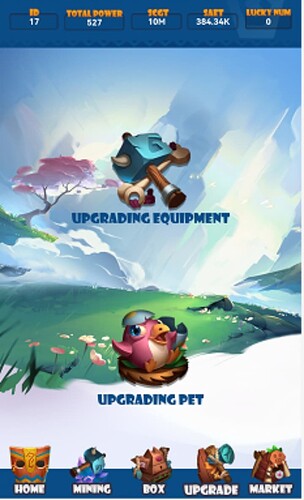