Our goal is to make PlatON/Alaya an open-source project that is community-driven, open development, and sustainable.

PlatON/Alaya are open-source projects, and all codes are released on the GitHub community. The projects will be governed by a meritocratic governance model based on consensus, where anyone interested in the project can join the community, contribute to its development and participate in the decision-making process. This document describes the responsibilities of the participants in the PlatON/Alaya project, how to participate, and the rules of procedure.

Open and inclusive, public and transparent, respect and recognition

How to contribute to PlatON/Alaya open source

Click on the following link to learn more about how to contribute to open-source projects and why you should get involved:

All of these contributions help keep the project active and strengthen the community. Therefore, we encourage the participation of a broader community of developers and project teams. 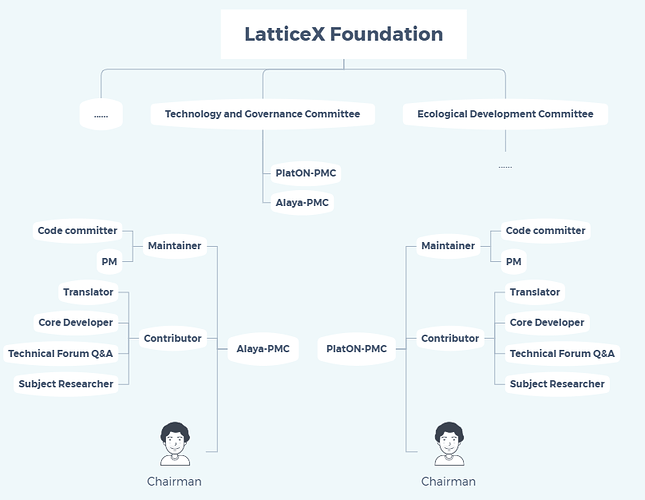 All active GitHub users involved in the project are contributors, and contributors have the opportunity to be nominated as new maintainers by existing ones (see note below).

As the project developer community is still in its start-up phase, the currently preferred types of contributors are mainly developers who are willing to participate in project development, technical support, and translation.

If you wish to contribute to the above contents, please contact the core developers on Our Discord channel to ensure that your contribution is in line with the overall project concept and to get early feedback and suggestions that can make your job easier.

Maintainers are community members who have administrative access to the GitHub open-source repository, including project PMs and committers, and are mainly responsible for the maintenance and management of the GitHub, keeping the GitHub active, and ensuring that the projects are going in the right direction.

New maintainers need to be invited by existing maintainers and approved to join by a vote of the PMC (Project Management Committee). Each project can be assigned with more than one maintainer.

The Project Management Committee (PMC) is initially composed of all maintainers, and future members need to be invited by existing PMC members. Nominees can become official members after being approved by the discussion and vote of the existing PMC members. (including Alaya PMC, PlatON PMC)

PMC members own the right to vote on new maintainers and PMC members. They also have the final vote when the community cannot reach a consensus. [The community uses lazy consensus, meaning that decisions are agreed to by default if no explicit objections were raised by community contributors and maintainers within 72 hours of release.]

The Main responsibilities of the PMC are:

The Project Management Committee has a Chairman who is elected by the PMC for a three-month term and is eligible for re-election. The PMC Chairman acts as the organizer, coordinator, and facilitator to ensure that all management procedures of the PMC are followed.

The Main responsibilities include:

The PMC Chairman collects and collates the performance of contributors and maintainers and reports it back to the LatticeX Foundation to apply for incentives.

Generally, as long as there are no explicit objections against the proposal, it is considered to win the support of the community, and the process normally takes 72 hours (3 days). This is known as lazy consensus - that is, those who have not explicitly expressed an opinion have implicitly agreed to the implementation of the proposal.

If explicit objections are raised against a proposal, we will further discuss and vote via a developer meeting, or a public mailing list. PMC members have binding votes, and the proposal will pass if over 2/3 of the members agree. All process records will be openly and transparently released to the public.

Meeting issues include, but were not limited to:

The meeting issues will be posted in meeting-issues. We recommend host the meeting online, and the meeting initiator should designate a host and a minutes taker for each meeting. The minutes and recordings of meetings should both be archived in the meeting repository, and upload the recording of the meetings to YouTube and Bilibili.

The PMC holds a community developer meeting once every 1-3 months according to the iteration plan, and the regular issues of the meeting include:

Anyone with an interest in PlatON/Alaya can attend, and the form of the meeting will be the same as the Core Developer Meeting.