The LatticeX Foundation Gives away 1,067 Limited-edition Badge NFTs as A Gesture to Appreciate PlatON Mainnet Contributors 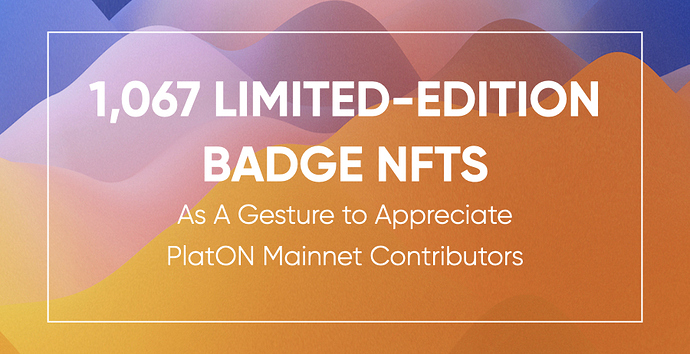 海报设计.033900×462 447 KB
The PlatON mainnet has been approved by the community with 80.60% of the votes, and its launch symbolizes the start of a new journey. So far, the PlatON mainnet has been running steadily for nearly a month, presenting good security and robustness. To express gratitude to the mainnet contributors for their earnest support, the LatticeX Foundation has sent a commemorative badge NFT to each of the 732 addresses that had voted for the mainnet launch.

Right before the PlatON mainnet launch, the LatticeX Foundation recruited a preparation team extensively across global communities. During the preparation, the team members cooperated wholeheartedly and contributed all their passion and diligence to the mainnet launch day and night. As a small acknowledgement of their effort, the LatticeX Foundation has sent each of them a PlatON community badge.

Moreover, node validators who have contributed to Alaya, PlatON’s meta-network, are of far-reaching significance to this launch. They are also the first community members behind the PlatON network. Therefore, we sent a commemorative badge NFT of Alaya nodes to each of the 260 addresses of nodes (including past nodes) on Alaya, as a token of gratitude for their continued support.

Small as it is, the badge bears witness to the indelible contribution made by community contributors, preparation team members, and nodes to PlatON in its infancy. As is written in PlatON’s genesis block, “We shall always keep to the upper road and practice justice with prudence in every way.” Plato’s motto for later generations will also be inscribed on the PlatON network from the official launch of its mainnet, guiding generations of PlatON followers to jointly shape a new digital era.