1. PlatON Won in Benchmark Test under the Test Conditions the Same as EOS

In early September 2020, PlatON completed a benchmark test under the test conditions the same as EOS, and stands out on performance overall compared with EOS. So far, it runs well.

2. PlatON CTO James Qu Made a Deep Interpretation about the Test Report of PlatON Benchmark Test

In late September 2020, PlatON CTO James Qu made a deep interpretation about the rest report of PlatON benchmark test that is conducted under the test conditions the same as EOS, to analyze how the benchmark test was conducted and how PlatON stands out on overall performance compared with EOS.

PlatON Performance Benchmark
A review about PlatON performance in the Benchmark under the same test condition as EOS from PlatON CTO James Qu. medium.com

3. PlatON CTO James Qu Gave a Keynote Speech on the Development of DeFi and Blockchain in POW’ER 2020 DeFi

On Sep.28, 2020, PlatON CTO James Qu, invited as a speaker, gave a keynote speech on the development of DeFi and blokchain in POW’ER 2020 DeFi. James emphasized that DeFi has huge potential, however, it also faces challenges on development. PlatON, as a new-generation infrastructure, is able to provide real-time market info, quantitative model and history data, etc,. It will be a good fit for DeFi. 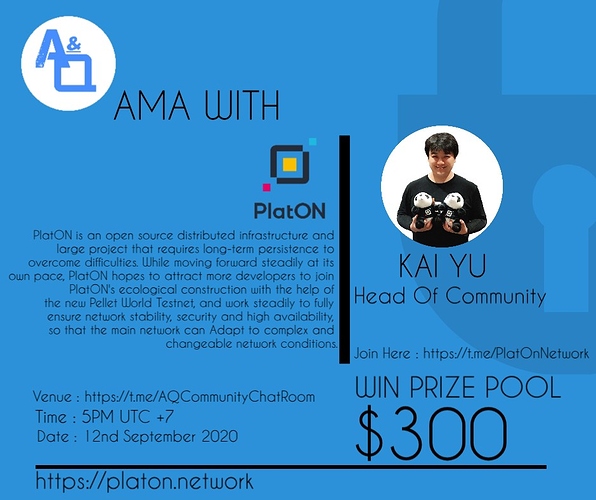 on 12 September 2020 we held an AMA with PlatOn and. for those of you who haven’t had the chance to participate in the AMA on that day we…

Completed the development of PAI 0.4.13 with newly added features as follows:

On Sep. 12, 2020, aitos.io CEO Leo Lin was invited, along with other industry experts, to participate in a joint cooperation signing ceremony at a 5G industry terminal summit together with China Unicom. Leo was instrumental in forming the strategic cooperation on 5G+ Blockchain with leading IoT ecosystem partners at the The 10th World Digital Economy Conference 2020 & Smart City and Intelligent Economy Expo.