On Jul.19, 2020, PlatON had its 2nd anniversary. To celebrate the 2nd anniversary and show gratitude to all supporters and community members for staying with PlatON, and their support and attention since the very beginning of PlatON community, PlatON hosted its 2nd anniversary AMA in its official Telegram community. The Head of Community Kai Yu, as the guest in this AMA, shared the plans and possilities of engagements between PlatON and the community. 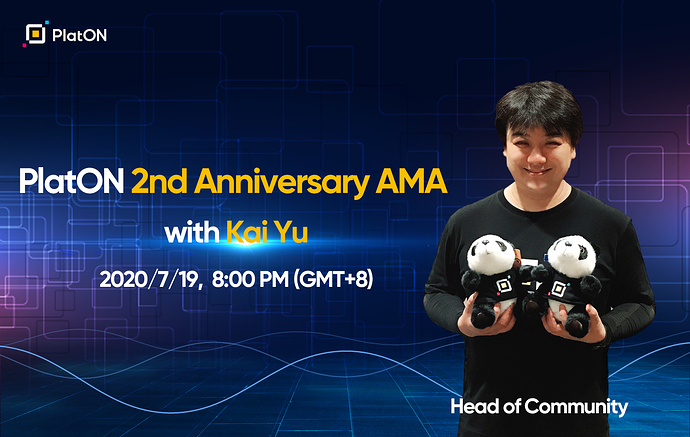 1. As Head of Community, can you tell us what’s the role that community plays in PlatON, and how do you plan on developing it?

For PlatON team and even the whole PlatON ecosystem, community is vital for the development of blockchain projects, and a powerful community consensus will bring great support for the long-term value of projects.

We aim at developing PlatON as a flourish and well-received community, and appreciate the core members who have stayed with us since the very beginning of PlatON community and their contribution. Thus, we have an ambassador plan to recruit the ones who are bullish about PlatON and want to be parts of PlatON. So far, we’ve selected the first ambassadors located in and will be responsible for the community growth in U.S., Korea, Indonesia, India, Vietnam, Philippines, Euro, Mainland China, etc. from the core community members. Besides, we are open to the collaborations on hosting different events and enhancing our community with all community partners worldwide, and planning to select the second batch of ambassadors from the reliable partners after the collaborations.

So, if you want to be an ambassador or collaborate with us, just feel free to contact us.

2. Can you share the reason why you joined PlatON team?

My career started from the Internet industry, and I have devoted myself to the publishing and operation of game industry for over 20 years prior to join PlatON team.

The reason why I joined PlatON is that I agree with the value and future of data. Data is a human right, and I think the combination of blockchain and privacy-preserving computation could be the support of data circulation to build a great and secure digital world.

Besides, PlatON has a team with solid background in both academics and technologies. Dr. Feng Xiao, PlatON Founder and Wanxiang Blockchain Chairman & Founder, is an advocate and the godfather in Chinese blockchain industry, and also an early investor of Ethereum. Mr. Lilin Sun, Founder and CEO of PlatON, is a pioneer in Chinse Fin-tech filed and also an advocate & sponsor of computational complexity theories such as ZKP, MPC, HE, algorithm game theory, etc. Mr. Xinjun Liang, PlatON Chief Advisor and Fosun Group Co-founder, is an economic leader in China.

Over the past four years, we keep investing on cryptography and have achievements on the leading technologies and engineering of cryptography.

Thus, PlatON stands out with:

3. I know many members want to be parts of PlatON ecosystem, can you share more possibilities that the community members can work with PlatON team?

Along with the launch of PlatON new Baleyworld test net in Feb. 2020, we’ve launched diversified campaigns for both validators and user community to get familiar with PlatON economic model and consensus mechanism, and sufficient rewards as well. This is a rare good chance for the starting of collaborations.

In addition, as I mentioned before, we kind of authorize the ambassadors to enhance PlatON community. And we are open to all kinds of collaboration with the communities and projects that may be interested in being parts of PlatON. Plus, we’ve announced our Grants program in early 2020 to fund and incubate the promising projects that would facilitate privacy-preserving computation, LatticeX Foundation and the whole blockchain industry.

We value the sincerity from the ones who want to work with us. So, if you want to be a part of PlatON, just contact us for a further discussion.

4. PlatON introduced PlatON 0.13.0 last week, can you share the next plan of PlatON to the community?

So far, PlatON 0.13.0 works well, and there have been around 50 validators connected to the new PlatON test net.

Currently, we are close to the final stage of PlatON main net. For us, the prime targets are to announce our main net in Q3, 2020 on top of keeping the overall performance, security and stability, and enhance our community. Just stay tuned for further updates.

5. How do you think about the coordinated social engineering attack on Twitter?

Twitter’s major hacking incident is a reminder that companies need to create a culture of privacy. Besides, there are huge potential risks of cryptocurrency due to the lack of compliance regulation, thus all kinds of cryptocurrency frauds are already commonplace. These kinds of frauds have been a great hidden danger for the development of the whole blockchain industry, which make it harder for newbies to get started with blockchain due to the security issues, and for the popularization of cryptocurrency as the frauds are damaging the impression.

If the cryptocurrency industry wants to move further, there must be related laws and rules to limit the negative issues. What comes first is that compliance should be enhanced and optimized to keep the interests of both nations and individual investors.

And Twitter’s attack issue is also a sign that privacy-preserving computation will be a must-have for all industries, and the game-changing innovation for the whole digital era in the near future.

1. What was the initiative to create and give the name of PlatON Network to this project?

The value of data is needed to be protected and maximized. PlatON, with the powerful combination of blockchain and privacy-preserving computation, is just the perfect match with the goal of enabling a better and more secure world.

PlatON, abbreviated from Plato Network, is to show our respect to one of the greatest western and even the world’s greatest philosophers and ideologists Plato after going through the whole computing theory.

From Leibnitz’s thinking on world’s computing attributes and the governance attributes, to the source of technology and governance, we finally chose PlatON as the project name that undertakes our concept and brief. From the technology exploration to the seeking of governance, Plato Network is the carrier of our ideals

2. Why should we trust in PlatON, and what benefits would it bring to the community?

I think your trust for PlatON is based on:

As a member of PlatON community, you will witness the growth and rising of a promising and even great project, and get more chances to work with PlatON team. Working with PlatON team will see the rare chance to compete with global big names. Besides, our infrastructure could change the world with a flourish ecosystem, then everyone could be happy with your achievements.

3. How PlatON wants to bring something unique & new?

The major difference between PlatON and other blockchain projects is that we could find the mission of blockchain and leverage it to enable a better and securer world.

4. What are the salient features and advantages for users of the underlying chain of PlatON 0.13.0

The biggest highlights of PlatON 0.13.0 are:

1.PlatON is a project that can support secure multi-party computation (MPC), what are the advantages of PlatON compared to projects related to MPC such as: Keep Network, ARPA, …?

2. What do the PlatON team think about DeFi ?

DeFi is meant to reproduce the businesses in traditional finance field on blockchain, especially the lending and borrowing business of bank. Before the blockchain takes effect in serving as the public infrastructure, the original assets transactions are just a game of market. However, the traditional financial assests haven already worked well before the rising of an emerging infrastructure. We think that the popularization of DeFi must be based on new assets, applications and services.

3. As we know that the main network of PlatON is planned to be launched in this Q3. Is your team ready at present?

We are working on that. Besides the underlying technology team, marketing, operation, ecosystem construction, etc. are all in the all-out sprint. We will share with the community if we have further updates. Just stay tuned.

4. With the recent economic downtrend that affected the entire crypto space, what really makes PlatON appealing to the new user? What can you say to a new investor that would convince them to use and hold PlatON?

Quite different from other blockchain projects, PlatON aims at serving as the infrastructure for privacy-preserving computation and distributed economies as we believe blockchain well fits the whole new assets that are based on privacy in the near future rather than the transfer of existing financial assets. Data must be the most important production factor in the near future, and PlatON is born to facilitate the data circulation. It is safe to say that without the public infrastructure, like PlatON, as the support, the whole digital era based on data won’t come. Thus, we believe PlatON fits the development trend. The higher the digitalization level of our daily life, the more meaningful PlatON is.

5. So far are there targets that have not been achieved by the PlatON project? And in the future whether able to achieve these targets?

So far, our plan went well. All targets in the plan have been achieved. I believe, with the joint efforts of whole PlatON team and all ambassadors, we can achieve the following targets as well.